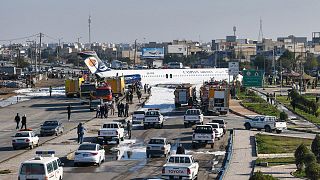 An Iranian passenger plane carrying some 150 passengers skidded off the runway and into a street next to the airport in the southern city of Mahshahr.

Passengers exited the plane calmly and there were no major injuries. Footage showed passengers being helped to the street below by people on the ground.

Provincial airport director Mohammad Reza Rezanian said all of the passengers had been safely taken off the plane.

Images from the scene showed the plane landed near a populated area. The plane had lost its landing gear in a hard landing, Iranian state television said.

The incident comes shortly after Iran shot down a Ukrainian passenger plane, killing all 176 people aboard.