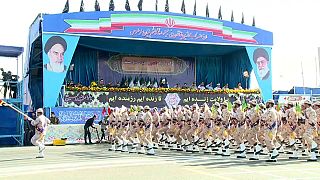 How could Iran respond to the US drone strike?

A US airstrike on Iranian military leader Qassim Soleimani has brought the Middle East closer to conflict, as Iran considers their response to the assassination of a national hero.

Analysts have said that retaliation from Tehran is unlikely during three days of national mourning, but leadership is likely to be narrowing the scope of its possible responses.

Iran's supreme leader, Ayatollah Ali Khamenei, met with National Security Council officials Monday to give directives about the extent of any retaliation.

"He gave the directive that any retaliation must be carried out by Iranians, and not by proxy, allied, or friendly forces around the region," Middle East analyst Rami Khouri told Euronews.

Tasnim news agency reported that Iran had compiled 13 possible plans for revenge for Soleimani's killing. The report quoted Ali Shamkhani, the secretary of Iran's Supreme National Security Council, as saying that even the weakest plan would be a "``historic nightmare'' for the US. He declined to give further details,

Many have also speculated about what could be the target of Iran's retaliatory efforts.

The US currently has troops stationed in Iraq and Syria, in addition to a military presence throughout the Gulf: in Kuwait, Bahrain, Qatar, the United Arab Emirates, Saudi Arabia and Oman.

Khouri thinks it's likely that Iran will seek to go 'tit-for-tat' with the US and strike a military target.