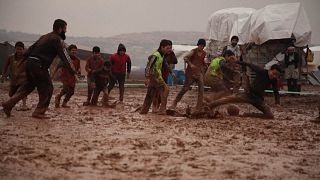 Displaced Syrians enjoy a game of football in jihadist-run region

Displaced Syrians enjoy a muddy game of football at a camp in the rebel-held northwestern province of Idlib, near the border with Turkey.

It was a brief respite for those in the jihadist-run region, which has been bombed by Syrian regime forces in recent weeks.

In December alone, according to the United Nations, some 284,000 were forced from their homes because of the violence.

It is the latest chapter of bloodshed in Syria's nearly nine-year-old war, which has seen up to 570,000 people killed, according to estimates.