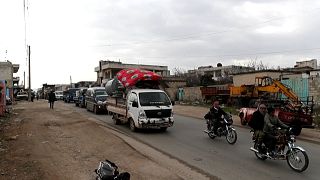 The strikes targeted the village of Jubass near the town of Saraqeb in southern Idlib province, killing civilians sheltering in a school and nearby, the Syrian Observatory for Human Rights said.

"Nine years into the war, children in Syria continue to experience unspeakable violence, trauma and distress."

Heightened regime and Russian bombardments on southern Idlib since December 16 have forced tens of thousands of vulnerable people to flee their homes, according to the United Nations.

Nearly 80 civilians have been killed by airstrikes and artillery attacks over that same period, according to the Observatory, which puts the number of displaced in recent weeks at more than 40,000.

An uptick in attacks around Saraqeb over the past 24 hours has driven thousands more out, the Observatory added.

The UN has called for "immediate de-escalation" and warned of further mass displacement if the violence continues in Syria's last major opposition bastion.

But Russian and regime airstrikes have continued to pummel the region as Damascus loyalists advanced on the ground.

Since Thursday, regime forces have taken control of dozens of towns and villages in southern Idlib following battles with jihadists.