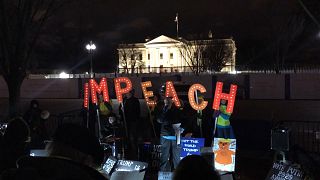 Tens of thousands of Americans marched in support of impeachment this week, from New York's Times Square to small towns around the country.

A group of demonstrators outside the White House played musical instruments and sang a pro-impeachment song.

A bitterly-divided Congress held a debate Wednesday ahead of a vote on impeaching President Donald Trump for abuse of power and obstruction of Congress.

Trump's impeachment by the Democrat-controlled House of Representatives will trigger a trial in the Senate, where Republicans enjoy a majority and are unlikely to vote to remove the 45th US president from office.

Traffic jams totalling 600km were recorded on around Paris on Monday morning as fresh strikes over pension changes brought public transport to a standstill in France for a third week.

In the Paris region, only two Metro automated trains with no drivers were fully running as the other 14 metro lines remained closed or only very partially running.

Most regional and national trains were at a standstill while international train routes also suffered disruptions.

Just outside the northernmost town in Sweden, with the temperature well below freezing, an artistic marvel is taking shape.

The Kiruna Ice Hotel, a chilly attraction that's been constructed from the snow and ice here at the top of the world each winter for three decades, has opened its doors.

Delicate details like this chandelier are made entirely of ice, drawn from a nearby frozen river.

In total, there are 15 individually-created art suites here, made by a team of sculptors and artists who have traveled from far and wide.