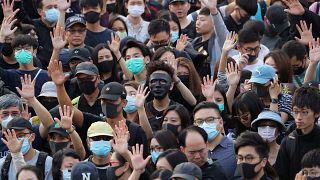 Marching near the waterfront on the Kowloon side of Victoria Harbour, they sought to keep the pressure on city leader Carrie Lam after pro-democracy candidates won district council elections a week earlier.

Some marched all the way to the Hong Kong Coliseum, which is located just opposite the Polytechnic University, the site of the last fierce clashes with police two weeks ago.

Riot police were deployed in the area as they raised warning flags.

Hong Kong police fired tear gas after an estimate of 16,000 attended a rally nearby.

A man, believed to be pro-government, was beaten by a clad of protesters in all-black outfits before he was escorted into a residential building in Whampoa.

Protesters set up roadblocks with bricks and vandalised some shops and restaurants linked to China.

The tensions on Sunday in the semi-autonomous city broke a rare pause in violence that has persisted during the six-month-long movement.

Trump has recently signed into law two bills that would ban exports of anti-riot munitions to China and impose possible sanctions based on its handling of Hong Kong, which drew a sharp rebuke from Beijing's foreign ministry.