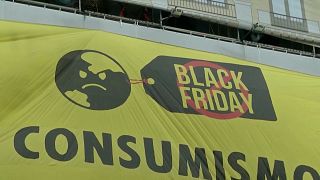 Activists holding signs also chained themselves to different high street shop windows but were later removed and arrested by police.

The Spanish capital is set to host the U.N climate summit of COP25 officially starting on December 2. The event was due to take place in Chile in December but was moved due to civil unrest there.

Meanwhile, dozens gathered outside the French headquarters of online retailer Amazon ahead of the Black Friday shopping frenzy. Demonstrators held up a sign reading "No to Amazon and its world" and chanted "against Amazon, we're winning."

According to social media posts from Attac, a group that campaigns for more democratic globalization, there was also a sit-in outside an Amazon logistics centre near Lyon.

Social media footage showed police in riot helmets picking up activists and hauling them away, with one police officer appearing to strike a protester.

In an emailed statement, Amazon France said it respected the rights of people to express their opinions but that did not extend to organizing violent demonstrations where people work.

French retailers have embraced Black Friday, named for the sales held on the first Friday after the U.S. Thanksgiving holiday when retailers typically heavily discount their goods to spur business. However, there has been a backlash against the event, driven in part by environmental concerns.