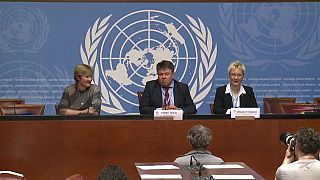 A climate politics expert has told Euronews that mobilisation on the level of World War Two is required to fulfil the Paris Climate Agreement's minimum target.

Heather Alberro is a co-convenor of The Political Studies Association Specialist Group on Environmental Politics. She made her comments to Euronews' Good Morning Europe after a United Nations report. said countries need to cut their emissions by five times their current levels to bring the temperature rise down to the Paris Climate Agreement's limit.

Presented at a UN media event in Geneva, the report said levels of heat-trapping greenhouse gases in Earth's atmosphere have reached another record high and will have a severe impact upon future generations.

"We have again broken records in carbon dioxide concentrations and we have already exceeded the 400 parts per million (ppm) level which is regarded as a critical level.

"That happened already two years ago and this growth of carbon dioxide concentration continues; last year's increase was about the same as we have been observing during the past 10 years,"

While CO2 remains in the atmosphere for centuries and in the oceans for even longer, concentrations of methane and nitrous oxide also surged by higher amounts during the past decade.

Since 1990, there has been a 43% increase in the warming effect on the climate, resulting from long-lasting greenhouse gases, of which CO2 accounts for about 80%.

"We've had over two decades of climate talks already and we've seen very little progress. In fact, emissions have continued to grow during this time period.

"It would be a level of mobilisation similar to World War Two.

"The G20 countries account for 78% of emissions and only the UK, France and Italy have set any concrete plans for zero emissions.

"The US is historically the most significant contributor to climate change and it has backed out of the agreement. China is dragging its feet and there's mass deforestation in Brazil, every year we drag our feet, we lose crucial time.

"We can still meet the initial target but it would take massive mobilisation."