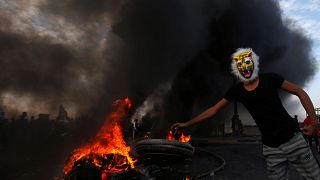 Black smoke filled the air as protesters burned tyres to block main roads in the Iraqi city of Basra, expressing their anger at poor services and shortages despite religious and political leaders calling for calm.

Basra has seen weeks of protests against poor quality of services, especially chronic shortages of clean water and acute power shortages, leaving residents with only a few hours of electricity per day.

At least one protester died and 70 people were wounded during the continuing protests across Iraq on Sunday.

According to official reports, the ongoing protests represent the most serious challenge to Prime Minister Adel Abdul-Mahdi's government.

The spontaneous rallies have been spurred mostly by youths wanting jobs, improved services such as electricity and water, and an end to corruption.

More than 15 years after the US-led invasion that overthrew Saddam Hussein, Baghdad and other cities still see frequent power cuts, the tap water is undrinkable and public infrastructure is crumbling.

Few Iraqis have seen any benefit from the country's oil wealth, despite it being an OPEC member with the fourth-largest proven reserves in the world.

At least 342 protesters have died in Iraq’s massive protests, which started on Oct. 1 when thousands of Iraqis took to the streets to decry corruption and lack of services despite Iraq’s oil wealth.