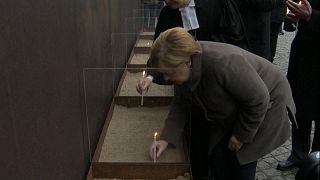 Germany on Saturday marked the 30th anniversary of the removal of the Berlin Wall, a pivotal moment in the events that brought down Communism in Eastern Europe.

Leaders from Germany, Poland, Hungary, Slovakia and the Czech Republic attended a ceremony at Bernauer Strasse — where one of the last parts of the Berlin Wall remains — before placing roses in gaps in the once-fearsome barrier that divided the city for 28 years.

The leaders stood beside a memorial that paid tribute to protesters in East Germany and neighbouring Warsaw Pact countries who took to the streets demanding freedom and democracy, and to then-Soviet leader Mikhail Gorbachev's policy of reforms.

Light installations, concerts and public debates were planned throughout the city and other parts of Germany to mark the fall of the Wall, including a concert at Berlin's Brandenburg Gate.