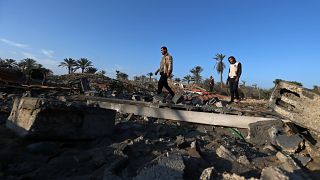 Al-Shehri was killed as Israeli aircraft pounded militant sites in response to rockets launched from Gaza, shattering a month-long lull in fighting between Israel and Palestinian militants.

In a statement, the Israeli Defence Forces said its warplanes targeted military compounds affiliated with Hamas, the Islamist movement that has ruled Gaza since 2006.

It said the targets included weapons manufacturing and storage facilities, as well as a naval base and a military aerial defence compound.

Late on Friday, 10 rockets were launched into southern Israel in two volleys within minutes.

Israeli police said shrapnel had damaged a house in the southern town of Sderot and video footage showed a car with its windows blown out by debris. There were no reports of casualties.

No Palestinian group has yet claimed responsibility for the rockets.

Gaza's Health Ministry said Ahmed al-Shehri, 27, died from shrapnel injuries during the Israeli bombings, which continued into the early hours of Saturday.

He was among three men who sustained moderate or serious wounds from one of the airstrikes, it said.

THE GAZA STRIP FUNERAL AIRSTRIKE
Now playing Next
no comment