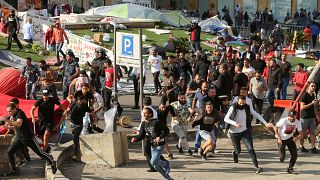 The unrest flared on the 13th day of mass protests directed at Lebanon's government and political elite, who the protesters accuse of corruption and incompetence.

The incident started when the men pushed their way into the protest camp set up by demonstrators on the Ring Bridge in central Beirut, trying to make them open the road.

The country has been rocked by days of anti-government demonstrations, fuelled by worsening economic conditions.

The ransacking happened before Prime Minister Saad al-Hariri resigned on Tuesday, amid the ongoing protests.