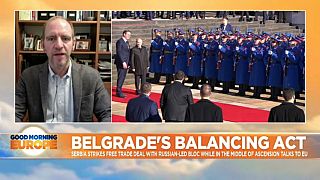 The Union, which is widely viewed as a Russian rival to the EU, counts Armenia, Belarus, Kazakhstan and Kyrgyzstan among its members.

Serbia's new free trade deal with Moscow puts it at odds with Brussels, as the country is in the middle of accession talks to the EU and is expected to align with EU foreign policy as part of that process.

Speaking to Euronews' Good Morning Europe, Florian Bieber, a Professor for Southeast European Politics at the University of Graz said Serbia is sticking to a long followed political tactic in the region.

“It’s been trying to do this for years. You could almost say that Serbia is copying what Yugoslavia decades ago, try to be between east and west," he said.

"Now that the European Union integration offer isn't as strong anymore as it used to be looking elsewhere. It looks actually like a wise choice, or that's it least how President Aleksandar Vučić is trying to sell it."

Moscow manoeuvres in the Balkans

When asked what Russia was hoping to gain from inviting Serbia to join the free trade deal, Professor Bieber said it was more about symbols than substance.

"For Moscow, it's mostly about symbolic politics. It's about showing that it has some influence in the Western Balkans and to sometimes throw a wrench into European integration.

"I don't think Russia is going to gain substantial economic or political weight in the region. After all, it's a region surrounded by NATO, deeply integrated into the European Union. It's just kind of showing that it's flexing its muscles and it looks bigger than it is. The Eurasian Union is also economically for Russia hardly significant, so this is more about politics and symbols than it is economics."