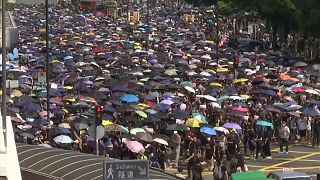 Hong Kong police fired tear gas at protesters throwing petrol bombs on Sunday (October 20) as thousands staged an illegal march through the Kowloon district that will test the strength of the pro-democracy campaign after four months of unrest.

Police inside the Tsim Sha Tsui police station fired volleys of tear gas and used a loudspeaker to called on protesters in the street below to disperse.

Hardcore black-clad protesters threw petrol bombs at the station's iron gate and inside the compound.

Hong Kong has been battered by months of often massive and violent protests over concerns Beijing is tightening its grip on the city, the worst political crisis since Britain handed the city back to China in 1997.

The crisis in the Chinese-ruled city also poses the biggest popular challenge to China's President Xi Jinping since he took power. Beijing has denied eroding Hong Kong's freedoms and Xi has vowed to crush any attempt to split China.

The unrest was sparked by a bill that would have allowed extradition to mainland China for trial in Communist Party-controlled courts. It has since widened into a pro-democracy movement.

Police also detonated what was believed to be an explosive found on Lai Chi Kok road in Prince Edward on Sunday.