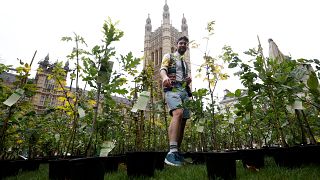 Climate change activists placed hundreds of trees outside the British parliament on Tuesday (October 8) to call on the government and members of parliament to plant billions of trees across the UK and support the planting of trillions all over the world.

Event organisers said some 800 potted native trees, many dedicated to lawmakers who were asked to collect them, were placed outside the parliament building.

Science presenter and campaigner Matthew Shribman, who helped organise the protest, said that the action was to call on lawmakers to commit to planting "billions" of trees.

Hundreds of tents have also been pitched all along Whitehall, past Downing Street and around Parliament Square as well as a camp in St James Park where residents plan to spend the next fortnight.

The protests are the latest stage in a global campaign for tougher and swifter steps against climate change coordinated by the group, which rose to prominence in April when it snarled traffic in central London for 11 days.