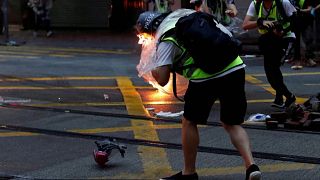 A witness told Reuters the device was thrown by protesters mistakenly at the journalist who was identified online as working for Radio Television Hong Kong (RTHK).

The reporter had been wearing a helmet that was marked with the words "Press". On Monday, the journalist was recovering in the hospital.

Protesters wore face masks in defiance of colonial-era emergency laws that were invoked by the authorities on Friday.

Police detained scores of protesters over the weekend after using pepper spray and batons on them.

The UN human rights office said on Monday that freedom of peaceful assembly should be enjoyed "without restriction to the greatest extent possible".