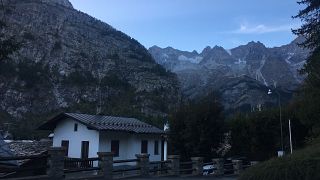 Dispatch from the field: Climate change and glacier fears in Italy

Talking climate change in Courmayeur is like trying to talk about an elephant in the room. In the local community of 3000, it’s a divisive issue.

As we arrived in the town near the Planpincieux glacier near Mont Blanc, I was surprised to hear local business and shop owners dismissing the fact that there is a link between increasing temperatures and the situation just a few kilometres away; the Planpincieux glacier sliding down the mountain at a higher speed than normal and threatening to send 250 000 cubic metres of ice plunging into the valley below.

Some locals blame the press for telling a different story and exaggerating the risks. Antonio, a local bar owner tells me that there is nothing exceptional about it – glaciers are always moving, and they have always done so. He doesn’t think it has anything to do with climate change.

In a town known around the world for its alpine history and culture, it’s the Alpine guides’ opinion that really matters. They know the mountains better than most, spending their days taking paying clients up to the glaciers. When I spoke to one of the guides in the Alpine Museum he says it straight, “there isn’t a problem with glaciers here”.

It's when I spoke to Stefano Bigio, the only local guide who was happy to be interviewed on camera that I realised why speaking about the glacier is big a deal in town. He tells me it has to do with tourism and the fact that alpine guides know that with glaciers disappearing, they won’t be able to offer the same tours they always have. But what options do they have now? What can replace those tours and keep money coming in if the ice melts and the snow season gets shorter?

Before digging into the issue, I wanted to make sure we got things and facts right. Is the city really in danger as some media has said, or not? How unstable is this glacier?

To get answers, we head nearly 3,000 metres above sea level to see things for ourselves. With the help of scientific researcher Daniele Giordan, of the Italian National Research Council's Institute for Geo-Hydrological Protection, we had the chance to see the glacier from above, on board a helicopter.

We could see clearly a crevasse, a deep crack. It looks like a block of concrete, but it's actually ice that's creeping down the mountain a bit each day, due in part to warm temperatures. As Giordan explains, the questions are if, when and how the glacier will slide down the slope of the mountain, towards a steep drop off.

A section of ice equivalent to the water in 100 Olympic swimming pools could break off, or lower temperatures could put the process on hold. The weather will also effect whether the ice breaks off in one piece, or slowly, in smaller bits.

Giordan has been monitoring the Planpincieux glacier since 2013, from a station he set up in the mountains across from it. He brought us to the station where they have been recording each movement of the Planpincieux using comparative images.

Based on that data, a mountain road has been closed and some holiday homes in the valley have been deemed off limits – but there’s no immediate threat to the town itself, which is about a ten minute drive from the danger zone. The threat in town is much more philosophical: What happens to a ski town when the snow itself is under threat?

You can see the Planpincieux glacier from the local high school, the Liceo Linguistico Courmayeur. It’s close to the town centre, and as a linguistic school, most of the kids speak excellent English.

I heard that the local teenagers had participated in the last global Fridays for Future climate strike, which just goes to show how big the movement has become; Courmayeur has a population of less than 3000 people. I asked if any of them wanted to speak to us, and four kids and two teachers showed up in the morning to sit in a classroom and talk climate.

The headmaster of the school, Franco Cossard, explained that permission for the students to strike came directly from the newly minted Italian government, and education minister Lorenzo Fioramonti. He wrote a letter to all Italian schools, urging students to miss school on September 27 to protest in support of climate action instead.

“It’s strange, because it’s a [protest], and the minister for the first time says, it’s okay and you can justify the students being absent,” said Cossard.

“And I think they did a lesson, even if it wasn’t it school, but it was a lesson. Maybe a better lesson than we do, normally at school.”

For these teenagers, climate change is something they think about all the time. They’re the first generation who have grown up with it, and saw the landscape of their hometown change before their eyes. They all had stories of the way things were when they were kids, and the way things are now.

“When I was young, I could see so much snow, when I would wake up in December,” said Clementina Masocco.

“There was so much snow, it was higher than me. And now it’s really, it’s really rare it snows up to here. So it’s sad for me, and other people. I think it’s good that people here see it, because it’s happening to them. When people see things happening far away, they don’t really realise what the problem is. But when it’s happening to them, then they realise that they should do something about it.”

They’re also remarkably candid about their own futures, and the future of their hometown. Courmayeur is a mountain town – every street in the city centre is lined with sports stores, outdoor outfitters, ski and snowboard shops. There are statues commemorating famous alpinists in pride of place. So without the snow, without the glaciers, what happens to Courmayeur?

“I don’t know actually, because the economy of my town is based on [the] glaciers,” said Francesca Cavoretto, who explained that she had only just started paying attention to climate change thanks to her friend Elena, who urged her to start striking.

I think the students were hopeful as much as they were sad – they all mentioned Greta Thunberg’s climate strike movement as inspiration, and as proof that they could change the world.

At the end of October, the mayor told us he'll be attending a town meeting called Climathon. It's open to everyone, and the aim is to come up with ideas on how to adapt the town's tourism industry for a future that's predicted to be much warmer. Hotel employees, business owners, and politicians will all be there, looking for answers, and hoping to provide some sort of future for the young people who live in Courmayeur.