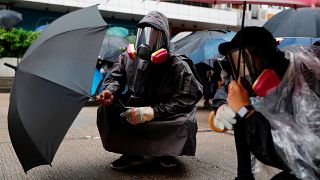 Tear gas fired at protesters in Hong Kong during protests

Police fired tear gas in several places in Hong Kong on Sunday (October 6) but there were no obvious signs of violence, with protesters ignoring the gas, dousing the canisters with water or tossing them back at police.

Tens of thousands of protesters marched through central Hong Kong on Sunday wearing face masks in defiance of colonial-era emergency powers which threaten them with a year in prison for hiding their faces.

Authorities are bracing for two major protests on Sunday, fearing a recurrence of Friday (October 4) night's violent protests which saw the Asian financial centre virtually shut down the next day.

Shouting "Wearing mask is not a crime," tens of thousands of protesters braved the rain as a court rejected a second legal attempt to block a masking ban aimed at quashing violence during four months of pro-democracy rallies.

The ban took force on Saturday, triggering more clashes and destruction over the last two days in the semi-autonomous Chinese territory.