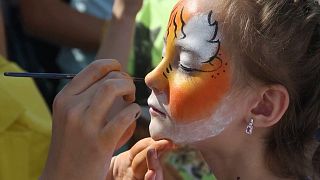 Amur tigers, also known as Siberian tigers, mainly live in Russia's the Far East, northeast China and northern parts of the Korean Peninsula. It is one of the world's most endangered species, with less than 500 believed to remain in the wild, only around 20 of which in China.

The Far East has been marking Tiger Day for 20 years, as the population continues to shrink due to poaching. The crowd marching down the city's main street also carried a gigantic paper Phoenix, a symbol of a local ecological organization, as local school children beat drums, chanting 'Beat your drum louder, tell the world: We are children of our planet and we are responsible for it!'

Ecologists say that 30 to 40 tigers are being killed in the Russian taiga every year, despite conservation efforts. The animals are often exported to China, where their bones and body parts are used in traditional medicine, Russia's RIA Novosti news agency reported. Tiger hides can also reach up to $25,000 on the black market.