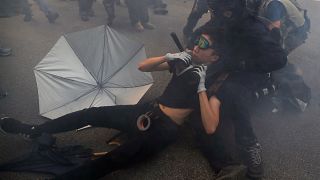 Police use tear gas at anti-China protest in Hong Kong

Police fired round after round of tear gas and rubber bullets at petrol-bomb and brick-throwing protesters in some of the most widespread violence in more than three months of anti-government unrest.

Protesters chanted slogans and heckled police as they were pushed back behind a police line.

The atmosphere was tense as police warned the crowd they were taking part in an illegal assembly.

Officers fired tear gas canisters after some protesters threw bottles and other objects in their direction.

Police earlier searched some protesters and several people were detained.

The crowd has swelled to more than 1,000 people, with many spilling into adjacent streets.

The protest on Sunday followed after another night of violent clashes with police after weeks of pro-democracy unrest in the Chinese-ruled city. Protests were sparked in June by planned legislation since withdrawn, that would have allowed the extradition of suspected criminals to mainland China. But they have since expanded into a broader pro-democracy movement.

More protests are planned in the run-up to China's the October 1 National Day, marking the 70th anniversary of the founding of People's Republic.