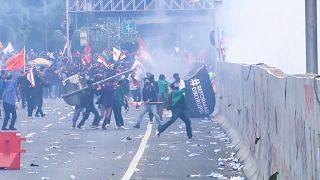 They were demonstrating against a range of issues including a new criminal code that penalises adultery, as well as revised laws on corruption.

Most of the protesters were students, wearing colourful jackets from their schools or universities.

President Joko Widodo on Friday ordered a delay to parliament's vote on the new criminal code, which would replace a Dutch colonial-era set of laws, saying a new parliament should deliberate on the bill next month.

The revisions to the code also include penalties for sex outside marriage, insulting the president's dignity, a four-year jail term for abortions in the absence of a medical emergency or rape, and a prison term for black magic.