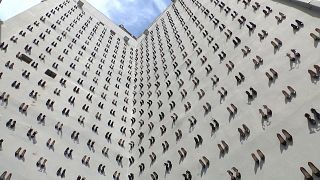 Four-hundred-and-forty pairs of high heel shoes hung on the walls of a building in central Istanbul to raise awareness against domestic violence.

The artist, aiming to raise awareness of women killed in domestic violence, said that he believes this installation has an impact on people since they face such a work of art for the first time.

In Turkey, there is an old tradition of placing the shoes of someone who passed away outside of the entrance door. The artwork has been installed on open air space, spreading across an area of 260 square metres.

Around 440 women were killed in 2018 in Istanbul, according to a report published by Kadin Cinayetlerini Durduracagiz Platformu (We Will Stop Femicide Platform) which keeps the records of femicides across Turkey. The platform reported that 49 women were killed by men in the month of August alone.