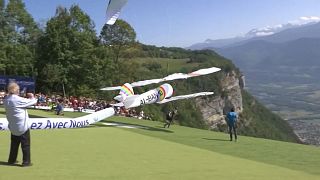 Around 130 pilots from France and beyond flew paragliders during the 'Icarnaval' carnival, a contest awarding pilots with the best costume prize.

The small village of Saint-Hilaire has been hosting a regular paragliding contest, the Icare Cup, since the 1970s. In 1987, the "masquerade contest" or "Icarnaval" was introduced alongside the main event for entertainment.

The Icare Cup began on Thursday and will end on Sunday. Organizers estimate around 100,000 spectators are expected to attend.