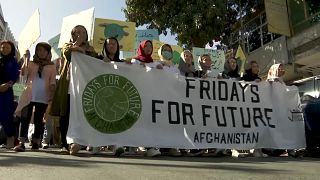 Troops atop an armoured personnel carrier and on foot, their rifles at the ready, protected about 100 of Kabul's young, who are worried that if war doesn't kill them, climate change will.

Protesters risked a march down the centre of the Afghan capital city on Friday despite nearly daily attacks by insurgents, in order to participate in a global strike against climate change.

Fardeen Barakzai, one of the organizers and head of the local climate action group called Oxygen, said Afghanistan's youth wanted to do their part in the fight against global warming.