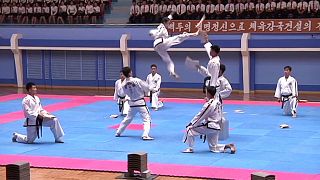 North Korea held Taekwondo demonstrations along with other forms of martial arts on Wednesday (September 18) to celebrate the 20th founding anniversary of its International Martial Arts Games Committee (IMAGC).

In the footage, North Korean torchbearers also were seen running through city streets after being handed a torch by a chairman of the IMAGC, Ri Yong Son, for the upcoming International Martial Arts Games.

The 8th International Martial Arts Games will be held in Italy later this year, according to KCNA and the committee's website.