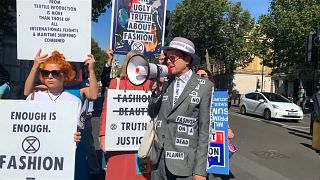 A small group of environmental activists from Extinction Rebellion stopped traffic and protested near the venue for Victoria Beckham's London fashion show on Sunday.

The activists briefly blocked roads near Britain's parliament in Westminster.

The group wrote in a statement: "The fashion industry is one of the most polluting industries in the world with a carbon footprint more than international flights and shipping combined."

"The industry is set to grow by 63 per cent by 2030, meaning even more destructive emissions. London Fashion Week sets a global precedent for the industry, driving the desire for consumption and fast fashion."

Extinction Rebellion is a civil disobedience movement that wants governments to address climate change in part by declaring it an emergency and by cutting greenhouse gas emissions to net-zero by 2025.