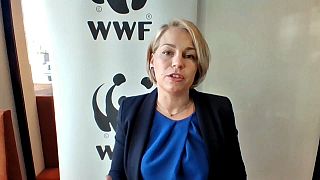 Only a fraction of the marine areas meant to be protected by the European Union are being properly conserved at present, according to a new report.

The research - by the World Wide Fund for Nature and Sky Ocean Rescue - says less than 2% of the EU's waters are being properly managed, compared to the target of over 12%.

Janica Borg from the World Wide Fund for Nature told Euronews' Good Morning Europe that the aim of the protected areas is very important:

"The aim of protected areas is to conserve biodiversity so that we can ensure that the oceans are conserved for future generations.

"Not only that, it's also important for a stable blue economy; this means greater use of marine sectors and is something the EU is currently developing.

"Currently, there's good intentions for protection. 12% of the oceans have been put aside to be protected, but 85% of these have no management plans, so there are no rules for what can and can't be done in these areas.

"All of these areas need to have management plans developed.

"We also need higher targets; 2020 is the year at which we are meant to reach the target of 10%. However, based on scientific evidence, 10% is not enough for ocean resilience, so we need to aim for the next goal. Looking at the evidence, 30% is what is needed to withstand changes such as those brought on by climate change."