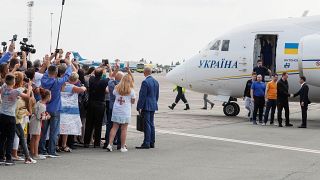 Russia and Ukraine carried out a long-awaited prisoner swap

Russia and Ukraine carried out a long-awaited prisoner swap on September 7 in a step that could thaw a deep freeze in relations since Moscow's annexation of the Crimea region in 2014.

Ukrainian President Volodymyr Zelenskiy hugged and shook hands with the freed Ukrainians, telling reporters that the swap was part of his deal with Russian President Vladimir Putin.

Among those stepping off the plane in Kyiv were 24 Ukrainian sailors and filmmaker Oleg Sentsov.

Zelenskiy said all steps had to be taken "to finish this horrible war," referring to the five-year-old conflict with pro-Russian separatists in eastern Ukraine.

Russian-backed separatists continue to control a swathe of Ukraine's east in a conflict that has killed more than 13,000 people. Zelenskiy has pledged to end the regular, low-level clashes that persist despite a ceasefire signed in 2015.

The swap could set the stage for serious talks, even though major differences remain between the two countries. French President Emmanuel Macron has been pushing for a summit to discuss the issue with Russia, Ukraine, Germany and France.