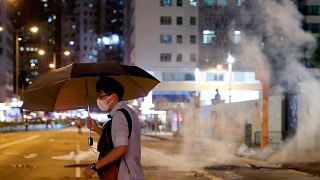 Hundreds of protesters, many of them masked and dressed in black, took cover behind umbrellas and barricades made from street fencing. Some had broken through a metal grill to enter the station where they pulled down signs, broke turnstiles and daubed graffiti on the walls.

Protesters had gathered outside Prince Edward station in Mong Kok, one of the world's most densely populated regions, where police had fired beanbag guns and used pepper spray to clear demonstrators this week.

They withdrew when police fired rubber bullets, but regrouped in smaller pockets to light fires in the street from wooden pallets, cardboard boxes and other debris. Firemen were dousing the flames.