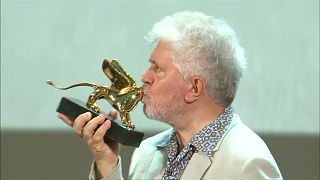 He was nominated for the festival's top Golden Lion prize in 1988 for "Women on the Verge of a Nervous Breakdown", a movie that brought him international recognition.

Almodovar, who has regularly worked with actors Antonio Banderas and Penelope Cruz, has won several awards for his movies, including a best original screenplay Oscar for drama "Talk To Her".

"All About My Mother", which he also wrote and directed, won the best foreign-language film Academy Award in 2000.