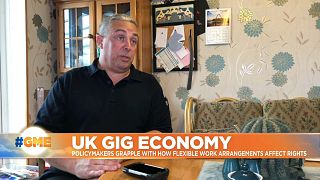 UK inequality: How the 'gig economy' is reshaping workers' rights

With France putting inequality at the heart of this weekend's G7 meeting in Biarritz, Euronews has spent the week looking at pockets of inequality that exist around the world. In Europe, well over 100 million people are estimated to be at risk of poverty.

In our final instalment in the series, our UK correspondent Vincent McAviney investigates how the rise of the so-called "gig economy" is being blamed for the erosion of workers' rights.

The term "gig economy" is a free-market system, which enables companies to look to work alongside freelancers or short-term contractors, rather than hiring workers on a permanent contract. The "gig", broadly speaking, stands for where workers are paid per job or particular project.

The "gig economy" has drastically increased in size over the past three years and now accounts for 4.7 million livelihoods in Britain. There has been a rise of so-called flexible work, with digital platforms like Uber and Deliveroo, who have sparked a revolution.

UK-based Ed Cross and his sister Anne-Marie Cross both deliver parcels and work in what's known as the "gig economy". Recently, Ed decided to take action against his company and with the help of the GMB union has successfully won more rights.

“I have been unable to take a holiday for nearly 12 years because of the tribunal. Now if I just don’t turn up for work without a reason, they can just remove my work, that’s it. I can be sacked. I know couriers who have been rung in the back of ambulances because they’ve had a heart attack and one of the first questions that are asked is “who’s covering your round?"

"You know people who can’t turn in that day because they’re sick or they say well can I have a pay rise and they go: ‘No because I’ve got ten other people who will do it cheaper'.

Annie-Marie highlighted there are more negatives for women when it comes to the "gig economy". She explained by not working in the traditional nine-to-five employee working week, it is a lot harder to have time off to have children.

“From a lady's point of view, it’s probably harder. You’re more on call as a parent and I think from that point of view they haven’t looked at the fuller frame.”

There are still many lingering questions on rights and even whether gig economy workers can earn a living wage without being dependent on welfare support. MPs are calling on the government to urgently update employment legislation.

Watch Vincent McAviney's report in full video in the video player, above