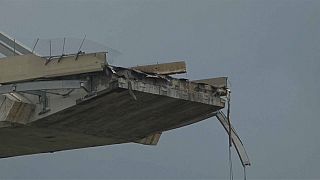 Parts of the motorway bridge that collapsed last year in Genoa hadn't been maintained for 25 years, a local prosecutor said on the anniversary of the disaster.

The cause of the collapse is still under investigation, but the ruling 5-Star Movement blamed Italy's biggest toll-road operator, infrastructure group Atlantia, for neglecting maintenance on the bridge. Atlantia has denied any wrongdoing.

"The investigation will tell whether (the lack of maintenance) was instrumental in causing the collapse," Genoa top prosecutor Francesco Cozzi told reporters at a news conference on Wednesday, following a memorial ceremony for the victims earlier that day.

Shares in Atlantia fell 4% on Wednesday after the prosecutor's comment.

Earlier, an expert told Euronews that maintaining similar older, longer bridges is "not easy" and expensive.

"To put (in) monitoring systems that can control old bridges is not very easy, it's more expensive also. so we cannot do that.

"In Italy, we don't have very long bridges like in other countries. The Morandi Bridge in Genoa was one of the longest spanning in Italy."

The collapse was one of the biggest disasters in modern Italian history and has highlighted the issue of poor infrastructure.

At shortly after 11:30 a.m., a 200-metre section of the bridge buckled and then collapsed. Three lorries and more than 30 cars fell to the riverbed and train tracks 45 metres below.

As well as the people who died, around 600 were made homeless.

Demolition of the remainder of the bridge was completed on Monday and a new street opened nearby.

But it will take until September for the rubble to be cleared and another a 18 months to complete the new bridge.