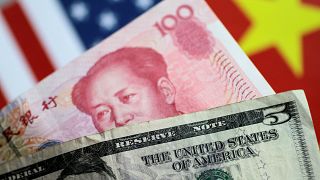 US labels China a 'currency manipulator' as trade war deepens

The United States has officially designated China a "currency manipulator", the first such accusation between major powers for a quarter of a century.

The US Treasury's move follows a sharp fall in the value of the Chinese yuan against the Dollar.

Treasury Secretary Steven Mnuchin is to report Bejing to the International Monetary Fund in an escalation of tensions between the two nations.

After China yesterday let the yuan weaken past the psychologically significant seven-per-dollar level, President Trump described it as "a major violation".

The move comes after Trump stunned financial markets by declaring his intention to impose 10% tariffs on the remaining $300 billion of Chinese imports from September 1.

Asian markets followed US and European stock markets in plummeting as fears grew of a worsening of the year-long US-China trade war. The Dow Jones had its worst day of the year falling 3%.

The accusation has driven an even bigger wedge between the world’s two largest economies and dampened any lingering hopes for a quick resolution to the trade war.

The dispute has already spread beyond tariffs to other areas such as technology, and analysts caution tit-for-tat measures could widen in scope and severity, negatively weighing on global economic growth.

The US Treasury’s decision to designate China a currency manipulator opens the way to possible additional sanctions. It came after Beijing’s central bank allowed its currency to weaken amid the ongoing trade dispute.

Oliver Pursche, Chief Market Strategist at Bruderman Asset Management, told Euronews: "I think it's China signalling that they've had enough, effectively. And the seven-per-dollar level has always been kind of psychologically important; I don't know that it's economically all that important, but psychologically it's always been the line in the sand."

No country has officially been named a currency manipulator by the US since Bill Clinton's administration named China as such in 1994.

China's central bank has dismissed the accusation saying it was not using its yuan currency as a tool to cope with external disturbances such as trade disputes. It insisted that the yuan's exchange rate was now at an appropriate level in line with China's economic needs.

China’s official Communist Party newspaper has followed the currency manipulation accusation by saying that the United States was “deliberately destroying international order”, although it did not reveal the US move to its readers.