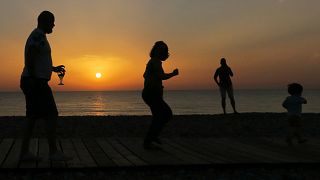 A heatwave gripping Europe has toppled all-time temperature records in Belgium, the Netherlands and Germany.

On Wednesday afternoon, Dutch meteorological service KNMI said it had recorded a temperature of 39.3°C in Eindhoven, breaking a national record set in Warnsveld in August 1944.

This was broken again on Thursday with a reading of 40.4°C in Gilze en Rijen. Another reading of 41.7°C recorded in Deelen has not been officially confirmed by KNMI.

It will also have taken fewer than 24 hours in Belgium for the new 39.9°C record to be broken, with 40.7°C observed in Beitem.

Germany's meteorological service DWD announced that 41.5°C has been recorded on Thursday in the northwestern town of Lingen and later flagged that a preliminary reading of 42.6°C had been recorded but that it needed to be confirmed.

The previous nationwide record had been set in Kitzingen in 2015 with a temperature of 40.3°C.

Temperatures were also expected to reach national all-time highs in the UK on Thursday, surpassing a 38.5°C record set in August 2003 but settled just slightly under with 38.1°C recorded in the afternoon in Cambridge.

The reading is only the second time temperatures have climbed "over 100 Fahrenheit" in the UK, according to the Met Office, which flagged that Thursday was nonetheless the hottest July day on record for the country.

National Rail has issued a warning to passengers and said speed restrictions would be in place throughout the day in order to prevent the tracks from buckling in the heat.

"A heavily reduced service is expected across many parts of the network today, and a number of train operators are advising customers not to travel unless absolutely necessary," a statement from the rail network said.

Record-breaking temperatures were also reported in Paris with a reading of 42.6°C at Montsouris weather station, breaking the 40.6°C record set just two hours earlier and the 1947 high of 40.4°C.

The northern cities of Lille, Troyes Rouen, and Dunkirk also broke records on Thursday, following Reims, Dijon, Nancy, which broke their all-time highs the day before and the hottest night on record with a national minimum temperature average of 21.4°C.

Patrick Galois, a senior weather forecaster at Meteo France, said there have been three times the number heatwaves in the last three decades than in the four decades before that.

He added: "The frequency has clearly increased and it should continue to do so in the decades to come."

Meanwhile, French health minister Agnès Buzyn cautioned everyone to take care by saying no one person was immune to extreme temperatures.

"There are risks even if you are not particularly vulnerable," she said.

The current heatwave is being caused by an ‘omega block’ — a high-pressure pattern that is blocking and diverting a jet stream of warm air from Northern African and the Iberian Peninsula.

Dr Jean-Noël Thépaut, the director of Copernicus Climate Change Service at the European Weather Centre, told Euronews that while it was "difficult to attribute" the repeated hot weather to a singular event, there were "studies looking at attributions of heatwaves to climate change."

Referring to another record-breaking heatwave in June, he added: "It was at least five times more likely to have this type of heatwave [in Europe] because of climate change than without it.

July temperatures have also led to over 160 billion tonnes of surface ice melting in Greenland, according to Ruth Mottram from the Danish Meteorological Institute. Forecasts predict more ice will be lost this month, potentially rivalling July 2012 when for a few days, 97% of the entire ice sheet indicated surface melting.