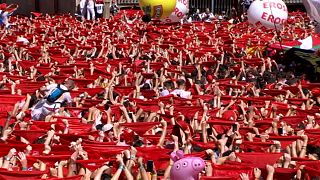 Sanfermines fiestas kick off with the 'Chupinazo' firework ceremony

The Sanfermines fiestas kicked off on Saturday in Pamplona with the much-anticipated “Chupinazo” ceremony, which sees the launching of a rocket to mark the start of the event.

Crowds gathered with their red neckties held high, waiting for the signal that meant they should put them on and start nine intensive days of non-stop festivities, running through July 14.

At midday, the mayor and members of the council stepped out onto the balconies of the Town Hall to greet the crowds.

The “Pamplonesa” Municipal band, which celebrates its centennial this year, had the honour launching the rocket.

When the firework had been launched, the square erupted as hundreds of bottles of champagne were uncorked and sprayed over the crowd.