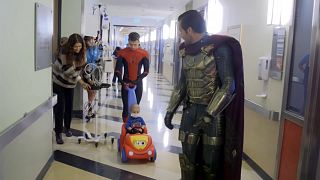 'Spider-Man' spins web of delight at children's hospital in LA

The surprise visit came after an exclusive screening of the Marvel film followed by a Q&A with the cast. In the upcoming sequel, Holland reprises his role as the titular web-slinger, Zendaya returns as Spider-Man’s crush MJ, and Gyllenhaal joins as Mysterio.

A touching video shared by the hospital shows the actors in full superhero attire to visit each patient in their hospital bed.

Later on, a young fan confesses his love for Holland (or at least his power-wielding character), saying, “I love you, and that you shoot webs.”

Holland playfully responded, “You like it when I shoot the webs? Well, I actually used all my webs on my way over here.”