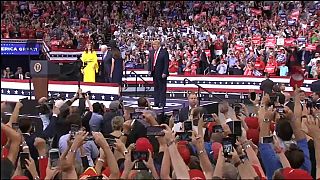 Trump behind in polls despite his claim that story is "fake news", says expert

Donald Trump is trailing almost all potential Democratic rivals for the 2020 US election; so says a political science expert who spoke to Euronews.

Trump launched his re-election campaign at a rally in Orlando, Florida and dismissed the polls as fake news.

“Mr Trump for several months has been on 42 to 43% in terms of his approval rating and in terms of potential match ups with candidates on the Democrat side, he is trailing almost all of them - including Joe Biden - by about 10%.

“Now, he may dismiss that as fake news, but the polls don’t lie.

“Most people have made their mind up about Trump and they either like him or don’t like him.

“The key variable here is who the Democrats will choose.”

Around 20,000 people were in the Amway Center to hear the man they say has their interests at heart, tackling immigration and creating jobs as he officially launched his re-election campaign.

"We're going to have over 400 miles of wall built by the end of next year, it's moving rapidly. Moving very rapidly.

“And you know we couldn't get the wall approved by the Democrats even though they voted for it four years ago and six years ago.

“It's moving along rapidly, it's beautiful. I changed the design. It's stronger, bigger, better and cheaper."