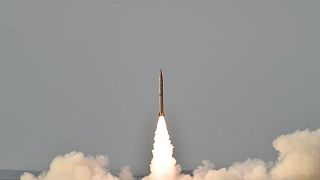 Will the nuclear threat return to Europe if Russia scraps INF treaty?

Fears the nuclear element of European security is coming back will be reinforced if Russia pulls out of a landmark weapons agreement with the US, an expert has told Euronews.

Russia's parliament will today have the first reading of a bill considering the suspension of the Intermediate-Range Nuclear Forces (INF) treaty.

Signed in 1987, it required the United States and the former Soviet Union to eliminate all of their nuclear and conventional ground-launched ballistic and cruise missiles with ranges between 500 to 5,500 kilometres.

By way of example, that means that missiles launched from the centre of Europe could reach as far as the eastern coast of North America or deep into Russia.

"It [Russia's suspension of the treaty] will just reinforce the concern that exists in many places in Europe that the nuclear element is coming back to European security," Dr Ian Lesser, vice president of The German Marshall Fund of the United States think tank, told Good Morning Europe.

"And that's happening at a time when the relationship with Russia shows no sign of getting calmer.

"There are countries like Poland the Baltic states that feel this threat very keenly.

"Ever for others like Germany, for example, France or Italy, I think many people felt this nuclear element is something that goes back to the cold war and it had been eliminated from the European scene and of course it's coming back in many ways."

The US has accused Russia of violating the terms of the INF and said Washington would quit the pact. Russia has since done the same.

Washington's in Europe are debating whether Russia's alleged violations to the agreement would warrant a countermeasure, such as the deployment of an equivalent American missile system in Europe.

Currently, the US has no nuclear-capable missiles based in Europe, the last of that type and range were withdrawn in line with the INF treaty.

Dr Lesser added the key is for the US and Russia to revisit the INF and update the treaty rather than scrapping it.

Watch Good Morning Europe's report on the threat to the INF Treaty in the player above.