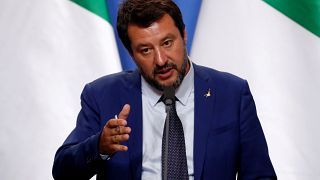 Salvini says he appreciates Trump administration ahead of US trip

Italian firebrand Matteo Salvini has few friends in high places in the European Union. His stance on migration as well as the Italian debt crisis has set him against heavyweight Europhiles like Emmanuel Macron and Angela Merkel, but he's hoping to build a friendship to trump the rest, as he heads to Washington to meet with US officials on Monday.

"I hope [that we can be America's biggest ally in Europe], it would be a great thing since we share common values and we have a good economic relations," he told NBC News' Claudio Lavanga in an interview before leaving for the US.

"My party appreciates the Trump administration, not only for their stance on immigration but also for the economic boost the creation of jobs, the protection of U.S. businesses, the economic growth, the tax cuts. So being one of the favourite partners of the U.S. in the European Union will be very important. Also on a geopolitical level since Italy's approach on some situations is different from some that of the European Union or some big countries like France and Germany. We have seen this in the past. We are seeing it in Iran and other situations."

Salvini confirmed that he is not scheduled to meet with President Trump, though he said it would be a pleasure to do so.

Meanwhile, off the coast of the Italian island of Lampedusa, a different situation is brewing that has already commanded Salvini's attention. Migrant rescue vessel Sea Watch 3 is currently stuck at sea with over fifty migrants on board, after it was refused entry to Lampedusa Port. The migrants were rescued from a rubber dinghy off the coast of Libya. 10 people have been allowed to disembark for medical reasons.

Time and time again, Salvini has been the driving force behind Italy's anti-migrant policies.

Just last week, his government adopted a decree that would see NGOs fined up to 50,000 euros for bringing rescued migrants to Italian ports.

And on Saturday, Salvini signed a decree specifically banning the Sea Watch 3 vessel from Italian waters. It still needs to be signed into law in Parliament, where the coalition between Salvini's League Party and the 5-Star Movement holds the balance of power. Salvini stands by the changes he's made.

“We just passed two security decrees which introduce the seizure of search and rescue vessels run by NGOs that do not respect orders given by our coastguard, and introduce a fine of 50,000 euros for those who do not abide to the rules - but you can’t put a wall in the middle of the sea.”

“Isn’t that like shooting on the Red Cross?" asked NBC News' Claudio Lavanga. "Those are people who are going out there to save lives.”

“Yes but there are cases. To save lives is paramount, the Italian navy does that. But if you save a life 20 miles off Tunisia’s coast, 50 miles from Malta and 100 miles from Italy, theoretically you go to the closest safe port. Provided that Libya cannot be considered a safe port by many... Many of these NGOs do not go to Malta or Tunisia, they come to Italy. Clearly, it’s a political choice."

His are not policies that have endeared him to other European leaders, the disagreements even raising the spectre of an Italian exit from the European Union. But Salvini also poured cold water on that idea.

"We would like to stay in Europe," he said.

"But we want to be treated fairly, and we want to be respected. You know what the talk has been in the last few days between Rome and Brussels... It's like, we're giving you a penalty. We're sending in inspectors. You have to raise taxes. We're telling you how it's done. And so on and so forth. No thanks, we're nobody's subjects. Nobody's slaves."