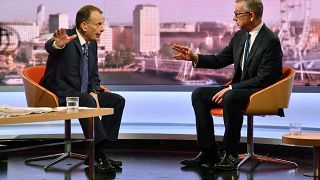 Conservative leadership contender Michael Gove was battling to save his bid to become the UK's next Prime Minister on Monday morning, following mounting scrutiny over his history of cocaine use.

In an interview with the BBC on Sunday, the environment minister denied that his drug usage as a young journalist had been a "habit' and pleaded for a second chance.

Asked if what he had down was a crime, he responded: “Yes, it was a crime it was a mistake, I deeply regret it.”

Pressed further, on whether or not he should have gone to prison, he said; “I was fortunate in that I didn’t, but I do think that it was a profound mistake, and I’ve seen the damage that drugs do. I’ve seen it close up, and I’ve seen it in the work that I do as a politician, and that’s why I deeply regret the mistake that I made.”

“I took it… several occasions, on social occasions, more than twenty years ago when I was working as a journalist,” he added.

“People should never be defined by the worst decision that they’ve made,” he said.

Gove currently has the second-most nominations among Conservative MPs for the party leadership – with 34 of his colleagues publicly declaring support for his candidacy. Boris Johnson currently leads with more than 50 nominations.

Yet whilst several other candidates have admitted to drug taking, it is Gove who has been worst hit by the issue. His time as both justice and education secretary, during which he oversaw a clampdown on drug usage, and articles he wrote around the time of his habit, have left him open to accusations of hypocrisy.

In an apparent swipe at Gove, his leadership rival Sajid Javid told Sky News on Sunday that “Anyone that takes Class A drugs needs to think about that supply chain that comes, let’s say, from Colombia to Chelsea, and the number of lives that are destroyed along the way,”

The deadline for nominations is today, at 5PM local time. The first round of voting, to whittle down the 11 candidates is scheduled for Thursday.