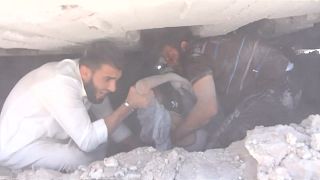 The Syrian Civil Defence, also known as the White Helmets, released videos on Tuesday showing rescuers pulling people from underneath collapsed buildings in the village of Sfuhen.

The SOHR said a woman was killed from barrel bombs in Sfuhen but that the death toll was expected to rise.

The bombardment has killed 229 civilians, injured 727 and forced more than 300,000 people to flee since April 28, according to The Union of Medical Care and Relief Organisations (UOSSM).