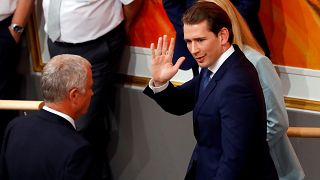 I'll be back - ousted Austrian Chancellor Kurz vows to return

Former Austrian Chancellor Sebastian Kurz has vowed to win back his job after he was ousted in a no-confidence vote this week.

Seen as a prodigy — he was the youngest Chancellor ever in the country — he left the Parliamentary session during which he and his government were turfed and walked straight outside to speak to his supporters, a huge crowd that was waiting in the rain for the outcome of the vote.

"We are all engaged. In the People's Party as we have one clear aim to and this is to serve our country," he said, while urging Austrians to support the caretaker government that will run the country until elections in September.

"We will ask for the support of the people. Today the Parliament has decided, but at the end of the day in September the people will decide in a democracy, and I am looking forward to this."

Strache was the leader of the far-right Freedom Party until a video emerged that appeared to show him offering government contracts in return for financial support. He resigned, but rejected culpability in the situation. The video tore apart the governing coalition as people directed their anger both at the Freedom Party, and Kurz's People's Party for teaming up with the far-right in the first place.

But the European elections told a different story, with both parties doing well. The People's Party took 34.9 percent of the vote in Austria, while the Freedom Party finished third with 17.2 percent. Strache himself has a seat in the European Parliament secured, though it's unclear whether or not he'll occupy it.

Journalist Stephanie Liechtenstein told Good Morning Europe that despite the result in Parliament, Kurz would be set for success in the snap elections.

"He's now the chairman of the Austrian People's Party, and he's now expected to engage in a very intensive election campaign," she said.

"Because he did really well in the European elections, and he's still immensely popular in Austria, despite the no-confidence vote... He gave a very defiant election speech, in which he said, yes the opposition is united in hatred against me, but I'm still standing. So I expect him, if nothing major and unexpected happens, I expect him to do really well in the snap election in September."

But it's not a good idea to count out Strache's former party either, according to Liechtenstein.

"It had damaged [the Freedom Party] a bit I would say, but not as much as you would expect, given the video which really showed some very scandalous scenes. So in fact they lost only one seat in the European Parliament elections, which kind of shows that they do have a very strong core base of voters who seem to support them no matter what. In my view, they will also do quite well in the snap elections, unless something happens again."

"But like I said, they have the support base, and interestingly enough, Mr Strache who is seen in this video, the former vice Chancellor, received 40 000 preference votes in the EU elections in Austria. So in Austria there's a system where you can express preference for one of the candidates on the list, and this theoretically gives him the right to take a seat in the European Parliament. Now, he hasn't decided whether he's going to take that seat, but the possibility is still there."