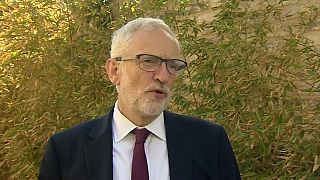 Will traditional UK parties learn anything from Euro Elections losses?

The UK's two main parties the Conservatives and Labour are examining their approach to Brexit in the aftermath of the European elections.

Both parties took a hit during vote, as many people deserted them for the Brexit Party and the pro-European Union Liberal Democrats.

Labour Party and Opposition Leader Jeremy Corbyn is under renewed pressure to commit unconditionally to a second referendum.

Meanwhile, some Conservative leadership contenders have further toughened their rhetoric about the need to realise Brexit.

The Brexit Party won 29 seats, the most of any single party in the UK by some distance.

He told Euronews that he was looking forward to making his voice heard in Brussels:

"We've got a mandate. We're going to be in Brussels. That's where the negotiations are going to be going on as we head up to the new deadline of the 31st October.

"Many of the men and women who have been elected on the Brexit Party lists, are businessmen and businesswomen of considerable experience.

"These are people who've done deals for a living. People who've run big companies and employed tens of thousands of people.

We want to be part of that negotiating team to make sure we're all ready to leave on October 31 on World Trade Organisation rules or whatever else."

The Liberal Democrats finished second behind the Brexit Party in the vote and achieved 15 MEPs, up from a single representative in 2014.

Leader Vince Cable said the result demonstrated a majority of voters in the UK who want to remain in the European Union:

"I think it's very clear from the big picture of the results, we now have a clear majority in the country who want to stop Brexit and stay in the European Union.

"As for our party the Liberal Democrats, I think we've done brilliantly well. Taken together with the local government election results a few weeks ago, we're clearly now a major national force again.

"Our next big task is to work with other people and other parties who are like-minded initially to stop Britain crashing out of the European Union by accident. There's a task ahead but we've had a brilliant result and we've got a lot now to build on it.

"Opinion has polarised, but it is moving in the direction of people who realise that it is a mistake to leave.

"I'm confident that we can win the argument in a referendum."