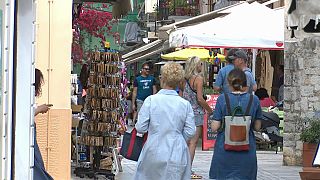 Greece was one of the countries hardest hit by the 2008 financial crisis.

After receiving a series of massive bailouts, the IMF claimed that the economy is now among one of the best performers in the eurozone.

But, some Greeks feel they are not reaping the benefits of the economic upturn.

The town of Nafplio, in the country's south, has been a major tourist destination for both domestic and international visitors for decades.

But, the industry diminished and so did the town's economy, due to a decline in domestic tourism caused by the debt crisis.

Antonis Katsoulieris, the manager of a small family hotel in Nafplio that opened during the crisis, said that Greeks have gradually spent less and less over the years.

''This was a very heavy winter, apart from the difficult weather conditions. I think that now we saw the damages that have been accumulating from the bailout programs the last years. I think that now we will see the worst effects of the crisis. It doesn't matter if we are out of the bailout programmes. It will be more evident now because people are left without money. The banks have stopped giving loans, so people don't have money right now and they are trying to close the wounds that remain open after all these years'," Mr Katsoulieris said.

In the same neighbourhood, Panagiotis Katsimpouris has been making and selling pottery since 1996.

He said that it is now time for Greeks to change their way of thinking.

''Our politicians must find a way to let investments into the country. Not investments of a colonial type, but we need jobs. They must find a way, maybe making full use of the National Strategic Reference Framework, we need jobs immediately. But we need to change our mentality, it is not only the Europeans, but we must also do something as well, 80% of the result is in our hands,'' Mr Katsimpouris said.

Greeks were hit hard by the austerity measures, and the country lost control of a significant part of its public assets.

Greece's two largest ports and the Hellenic Gas Transmission System Operator were privatised, and there are currently plans for privatising the public gas corporations, eight marinas and ten more ports.

Concessions for Athens Airport and 14 regional airports were also signed by the Greek government.