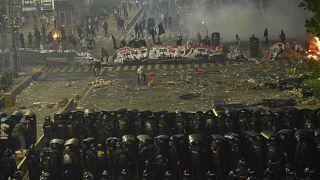 Indonesian police fired water cannon and rubber bullets at protesters trying to breach barbed wire barricades on Wednesday (May 22) as demonstrations over the outcome of the presidential election hit the capital for a second night.

Many left peacefully, but as night fell others hurled firecrackers and other objects at officers as they tried to breach the barbed wire separating them from the police.

The riots followed an announcement on Tuesday (May 21) by the General Election Commission (KPU) confirming that President Joko Widodo had beaten his challenger, former general Prabowo Subianto, in the April 17 poll.

The election supervisory agency dismissed claims of systematic cheating, citing a lack of evidence. Independent observers have said the poll was free and fair.