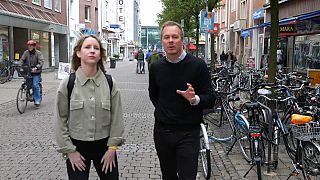 Road Trip Europe Day 48 Munster: How refugees have settled in the city

Amid much talk in recent years of the refugee "crisis", in the German city of Munster absorption of displaced people into the community seems to be working well.

The city has worked hard to organise events to integrate Syrian refugees who have settled there with the rest of the population.

As Euronews' Road Trip has discovered over the past weeks, immigration is an issue for voters in many parts of the EU ahead of the bloc's election.

This is certainly the case in Germany, with the prominence of the anti-immigration Alternative For Germany (AfD).

In Germany, those seeking asylum are initially dealt with in the region of the country that they have arrived in.

They can then be accommodated in reception facilities for up to six months, or until their application is decided upon.

The quota system is calculated on an annual basis by the Federation-Länder Commission and determines what share of asylum-seekers are received by each of Germany's federal areas.

This ensures what should be even and appropriate distribution among the Federal Länder.

Watch the latest road trip instalment in the player above