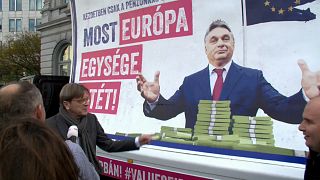 The European elections are just two weeks away, and as the trend of voting against the status quo continues in national elections across the bloc, the results promise to be surprising.

The Alliance of Liberals and Democrats for Europe (ALDE) group, led by Guy Verhofstadt, has been campaigning as a change-maker, but are competing against the vocal right-wing for that title.

Verhofstadt has been simultaneously courting France's Emmanuel Macron and positioning himself as a fierce critic of Hungary's Viktor Orban. ALDE has indicated it would like to form a new group after elections that would include Macron's 'La Republique En Marche' party, but the response has been cool so far.

Watch the profile of centre-left grouping ALDE in the video above.