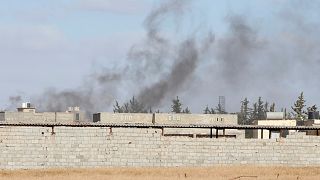 Hundreds of thousands of refugees could flee the fighting caused by Libyan Army chief Khalifa Haftar’s attempt to seize Tripoli – that is according to Fayez al-Sarraj, Libya's Prime Minister, who leads the country’s UN-recognised government.

He has brought that warning to Italy - where he is meeting Italian Prime Minister Giuseppe Conte as part of his European tour, during which he is scheduled to visit Rome, Berlin, Paris and London.

He is accompanied by both Libyan interior and foreign ministers and Libya’s ambassador to the European Union.

The trip is clearly designed to alert all EU states to the possible consequences for European migration of a prolonged civil war in the country.

Libya has long been a conduit for migrants fleeing war and poverty, hoping to get to the European Union. The aim has been to obtain passage in some sort of vessel and sail to the nearest land point - the Italian island of Lampedusa in the Mediterranean.

Risking life and limb with often tragic results, an estimated 360,000 refugees and migrants tried to cross the Mediterranean in 2016.

Rome and the EU have since tried to shut down the route between Libya and Italy, funding Libya's coast guard to intercept migrants.

The heavy migration via Libya has powered the rise of political figures such as Matteo Salvini, Italy’s dominant politician and head of the anti-immigration League party.

He seized the headlines by not letting some migrants disembark from rescue ships in Italian ports.

Salvini's hard-line tactics, including keeping 177 migrants docked on a ship for five days, have prompted prosecutors to investigate him for allegedly kidnapping migrants.

In the meantime, the EU has also tried to block the route between Libya and Italy, funding authorities there and its neighbours. The bloc has granted some €230 million to Niger, the main southern gateway to Libya.

While the overall number of arrivals in Europe has fallen sharply, the near-closure of the Libya route has diverted migrants towards Morocco, from where they head for Spain.

Italy may have seen migration numbers plunge, but its government sees this as a success and warnings of a possible second migration wave it means it is very eager to see a truce in Tripoli.