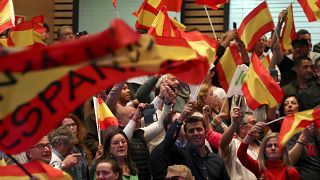 According to a poll by the Center for Sociology Studies, 60% of undecided voters are women. That means around 4 million women are unsure who they will be voting for in the upcoming election.

This means women could help swing the election one way or another.

The poll also revealed that women are less likely to vote for new parties such as Vox, Podemos and Ciudadanos.

Feminism has become the buzzword of electoral campaigns in Spain’s general election taking place on April 28th. Following strikes and mass protests seen across the country during International Women's Day in the beginning of March, left-wing and liberal parties are campaigning on women's issues.

Ciudadanos, a centre-right party, have proposed a "liberal feminist manifesto" which regulates prostitution and surrogacy while even the conservative People's Party have pledged to tackle the gender pay gap. Far-right party Vox has responded to this saying radical feminism has run rampant and that they want to limit abortion rights.

A cause of this focus on women's issues could come from women being more politically active.

"One of the reasons for the rise of feminism in Spain is the wave of protests that started with the 15 million movement and has led to a more active society where people are more engaged in politics."

Many women have protested the presence of a gender wage gap - they earn 15.1% less than men according to Eurostat.

Hotel waitresses have been protesting every month to fight this inequality as well. "Not only wage inequality, but specific jobs that make it seem like we're subservient to them and that we're working in exploitative conditions, that don't look like they should be in the 21st century. There are women who are still scrubbing on their knees", says Ángela Muñoz, member of Kellys Organization.

Another of the main pending issues is the fight against gender violence. Condemnations have increased in the last year. The Ana Bella Foundation provides workshops to help women who've been victims of abuse-

Beberly Barragán works in Human Resources at the Ana Bella Foundation and said, "Within the pact of state, the main proposals that we've made are mainly based on the fact that a woman does not need to report to the police to be able to enter a shelter. Meanwhile, it's important that they help the labour market, and in addition, it's important that everyone who takes part in the process of helping victims of gender violence, has a very intense form of training."

In addition to complying with the State Pact, the Spanish Socialist Worker's Party (PSOE) has included in its programme a specific section for a "feminist Spain" which proposes modifying the penal code, provide an equal opportunities law and an anti-trafficking law. And the Unidos Podemos coalition has changed its name to Unidas Podemos, which is now a feminine name.

Cristina Monge added, "The truth is, on the conservative side, it's a little scary to see extreme right-wing proposals from parties such as Vox, questioning basic issues such as the right to abortion, something that's already well established in Spanish society, and now it returns to public debate and questions women's rights. Meanwhile, we have Citizens, who do not want to miss the movement on March the 8th and want to bet on the discourse of liberal feminism, which is something that generates a lot of controversy because from the theoretical and philosophical point of view it's difficult to understand".