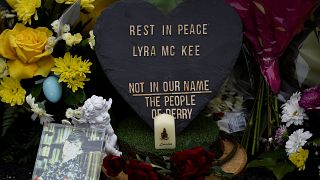 Residents of Londonderry are “incensed” by the New IRA’s apology for the killing of journalist Lyra McKee, Euronews correspondent Vincent McAviney reports.

The New IRA described McKee’s death while covering riots last week as an accident provoked by “an incursion” by British armed forces.

SDLP leader Colum Eastwood warned an absence of political leadership was creating a dangerous climate: “We have a political vacuum now in Northern Ireland that needs to be filled because political vacuums can lead to real danger on the streets. And that’s why our politicians, and I’ve written to them all, including the Prime Minister and the Taoiseach Leo Varadkar, need to come together now. People are now determined to get these people off our backs. We’re not going to allow them to drag us back and further.”

Journalist and activist Eamon McCann said an unfavourable economic climate created an environment in which young people can be drawn into violence: “You look all around this area you’ll see murals on the walls of gunmen and so on, and quite literally youngsters are invited to look up to these images, to look up to images of gunmen. You know, glorious heroes from the past. Now if you’re 14-15-16-years-old and not having much of a life and very little to look forward to, this idea sort of that to be a member of the New IRA or whatever it’s going to call itself I mean this is almost glamorous, almost glamorous as it’s presented to you.”

Watch Vincent’s report in the video player above